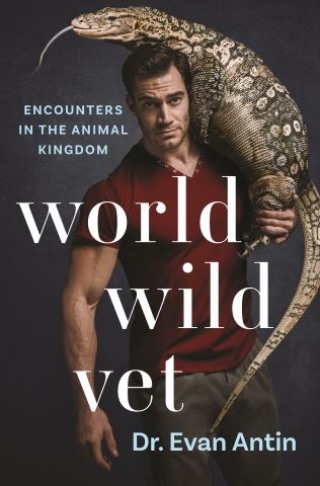 Encounters in the Animal Kingdom

A wild look at our natural world for fans of Steve Irwin, James Herriot, and Bear Grylls

Millions follow Dr. Evan Antin and his wildlife adventures through social media and on his popular Animal Planet television show Evan Goes Wild. Now in his first book, World Wild Vet, Evan takes us to the deep blue seas, swimming with giant whale sharks with “puppy dog eyes," to jungles filled with venomous snakes (who are more afraid of you than you are of them), to a race across the savannah and against the clock to save rhinos from the clutches of poachers—all in the name of adventure and a deep love for the wild around us.

Equal parts memoir, travelogue, and conservationist wake up call, World Wild Vet is an unforgettable exploration of the world we all call home and a love letter to the creatures we share it with.

Evan Antin: Dr. Evan Antin originally hails from Kansas City, Kansas, where he spent much of his childhood in search of native wildlife, including snakes, turtles, and insects. He went on to study evolutionary and ecological biology at the University of Colorado at Boulder and veterinary medicine at Colorado State University. For fifteen years Evan has traveled the world, working with wildlife in ecosystems on six continents. In addition to his wildlife veterinary and conservation work, he is a practicing veterinarian in Thousand Oaks, California.