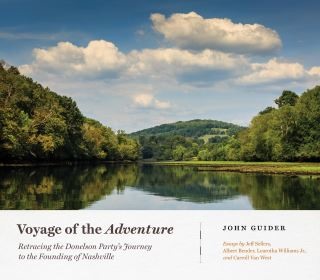 Voyage of the Adventure

Retracing the Donelson Party's Journey to the Founding of Nashville

In the harsh winter of 1779, as the leader of a flotilla of settlers, John Donelson loaded his family and thirty slaves into a forty-foot flatboat at the present site of Kingsport, Tennessee. Their journey into the wilderness led to the founding of a settlement now known as Nashville—over one thousand river miles away. In the fall of 2016, photographer John Guider retraced the Donelson party's journey in his hand-built fourteen-and-a-half-foot motorless rowing sailboat (named Adventure II after Donelson's boat) while making a visual documentation of the river as it currently exists 240 years later.

This photo book contains more than 120 striking images from the course of the journey, allowing the reader to see how much has changed and how much has remained untouched in the two and a half centuries since Donelson first took to the water. Equally significant, the essays include long-ignored contemporary histories of both the Cherokee whom Donelson encountered and the slaves he brought with him, some of whom did not survive the journey.

From his platform just a few feet above the waterline, Guider, a professional photographer, created images of the thousand-mile trip along three of Tennessee's most notable rivers.

John Guider:
John Guider is an Emmy Award–winning photographer and author. The Nashville Public Television documentary Voyage of Adventure was honored by the National Academy of Television Arts & Sciences in 2020.