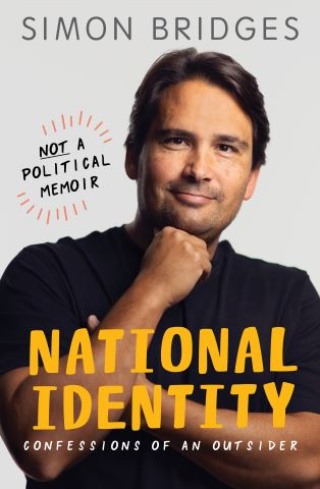 Confessions of an outsider

An open, honest and at times intensely personal memoir about race, fatherhood, marriage, masculinity, fitting in, and the things that shape our national character.

Simon Bridges grew up as the son of a working-class Baptist preacher in Te Atatu, as the youngest of six children. In many ways he had a typical Kiwi upbringing, at a time when having little didn't seem to matter much. Yet for Bridges, his was the life of an outsider: experiencing otherness for being Maori, and yet an otherness from other Maori; a Westie with a thick accent, trying to break into the upper reaches of society; distanced from his father, an ageing man in his own world. As a young politician, Bridges soon came to realise he was an introvert in an extrovert's world, and a male leader who has never identified with New Zealand's idealised version of the strong, laconic, rugby-loving man.

In National Identity, Bridges offers an attempt to question himself and the country he loves. Politics, crime, kai, music, nature: these are the stuff of a life. Through candid and self-aware reflections, he points out that politicians have become less robust, and that people don't participate as much anymore - eroding our institutions and national life. He speaks his mind on an education system in crisis, the decline of Christianity, and how being the smallest, most isolated developed country in the world explains why we are how we are.

Simon Bridges is a former lawyer and a sitting Member of Parliament. His father was a Baptist minister of Maori (Ngati Maniapoto) and Pakeha descent. His mother was a primary school teacher, of proud Yorkshire heritage. After graduating from Auckland University, Bridges received a Bachelor of Civil Law from Oxford. Bridges also studied at the London School of Economics and interned at the British House of Commons. In 2008 he was elected as the MP for Tauranga.

Bridges served as a Minister in government from 2012 to 2017 under Prime Ministers John Key and Bill English, before serving as the leader of the National Party and Leader of the Opposition between 2018 and 2020. He was the first major political party leader in New Zealand with Maori ancestry. He lives in Tauranga with his wife, Natalie, and their three children.